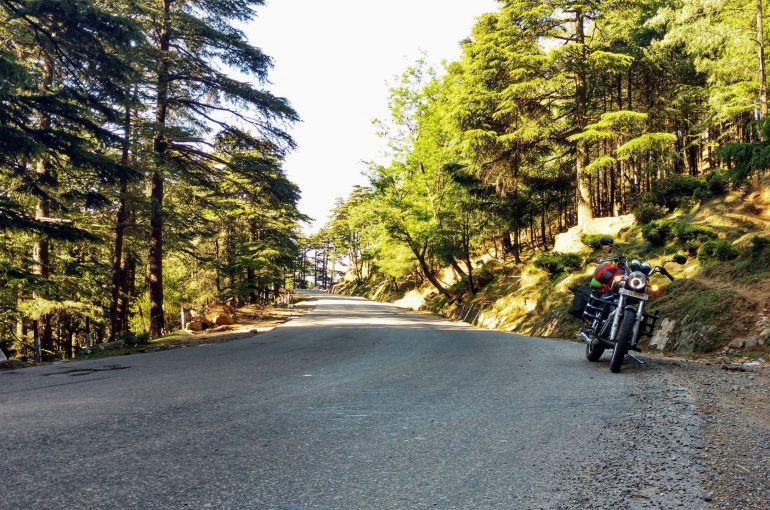 This was a big day for me; I wanted to get some well rested sleep the night before. But I was so very excited that I could not sleep for more than 3 hours and was up and awake at 4 am, after getting myself and the bike ready. I left my house around 0545hrs. 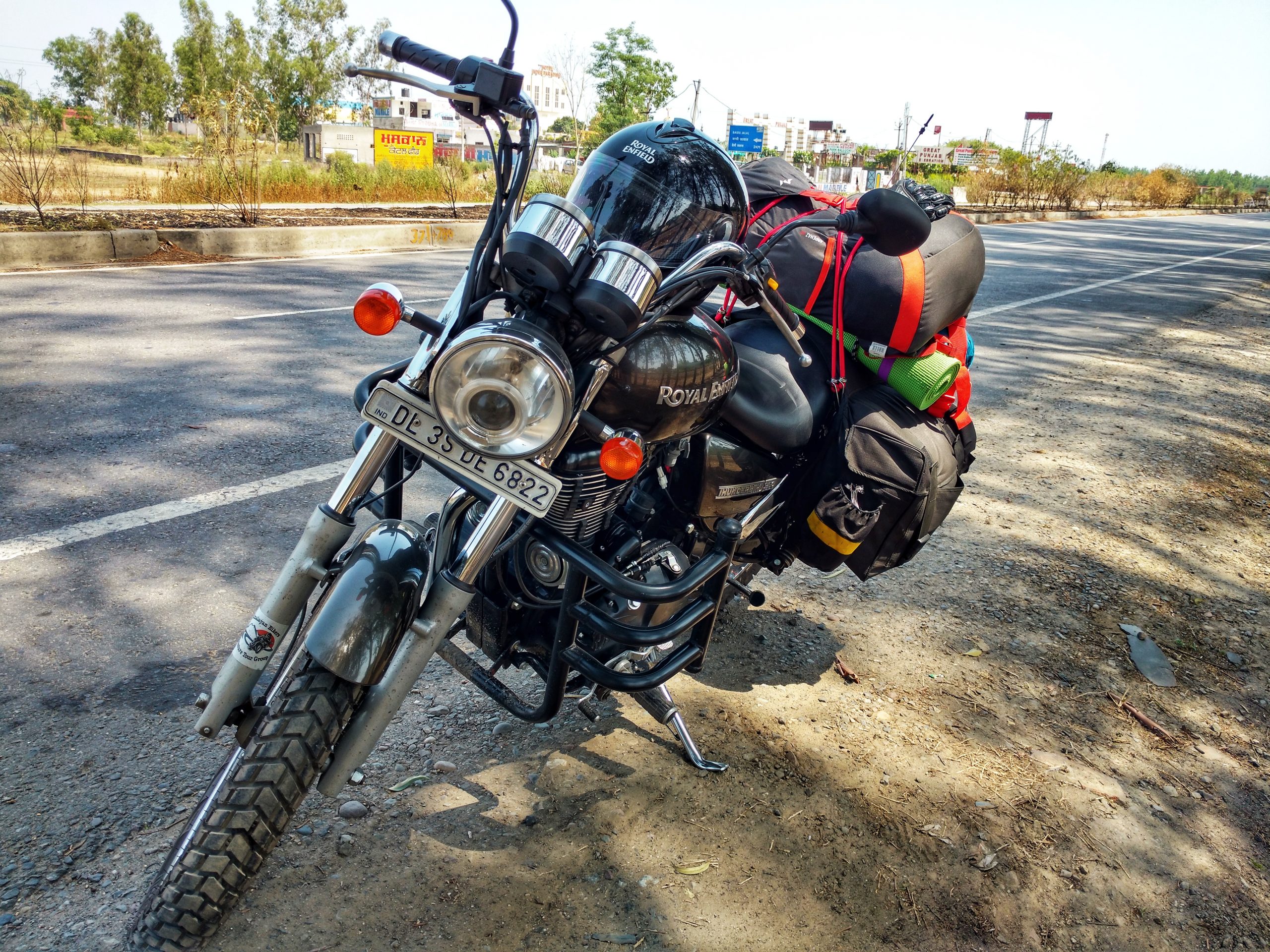 I rode with so much excitement and energy and after riding for more than 4 straight hours my first halt was Ambala at 0910 hours, where I had my first meal of the day with a friend of mine. I entered Punjab and crossed Ludhiana, making my second halt at Jalandhar for lunch. As I entered Pathankot, the mountains had welcomed me in their folds with such a beautiful scenic view. The adrenaline rush from the morning rushed through my body, which gave me more energy to keep riding till I reached Jammu at around 1710 hours. 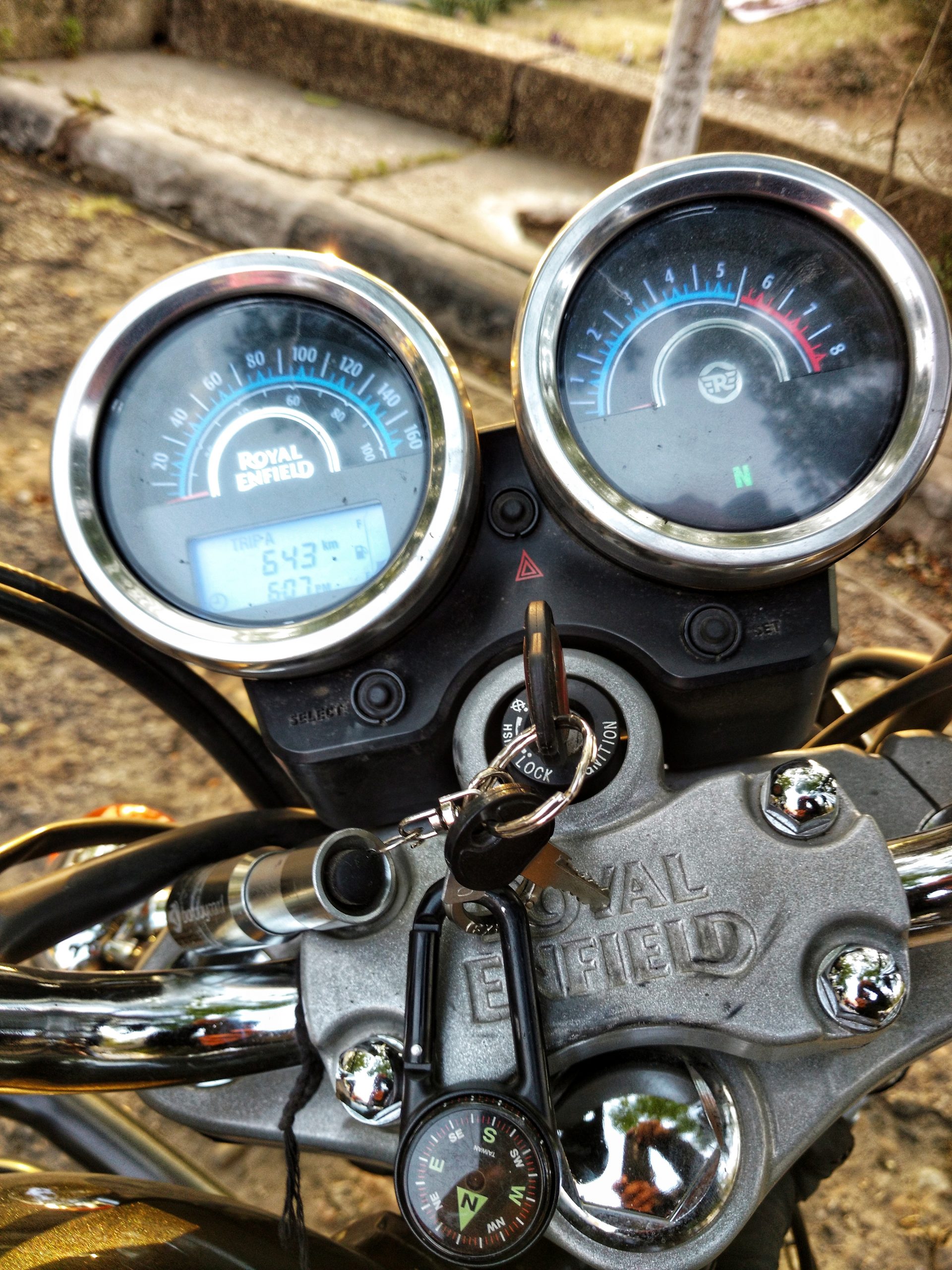 I stayed overnight at Jammu as I had covered 643 kms. I needed some rest and dinner, and so I booked a room at Hotel Jammu Ashok. I unloaded the luggage from my bike, checked in and took a well-deserved shower. A friend had suggested that I have dinner at Hari Vilas, Hence I did. On my way back to the hotel I got a petrol refill and tyre pressure checked, my next day was planned to head towards Srinagar.

I honestly could not wait to start early in the morning again.

I started my day 2 early morning at 4:30 am, and the plan was to reach Srinagar before dusk. I reloaded my bike and started the engine at 0530hrs. I made two stops midway just to check if everything was OK with the bike and once I took a halt for a chai break. The tea shop had extreme habit of serving tea- either too salty or too sweet, I tried both and I guess that’s just how they do it. Just after I crossed Jawahar Tunnel, I entered the Kashmir Valley and after a few more hours of ride I reached Srinagar. 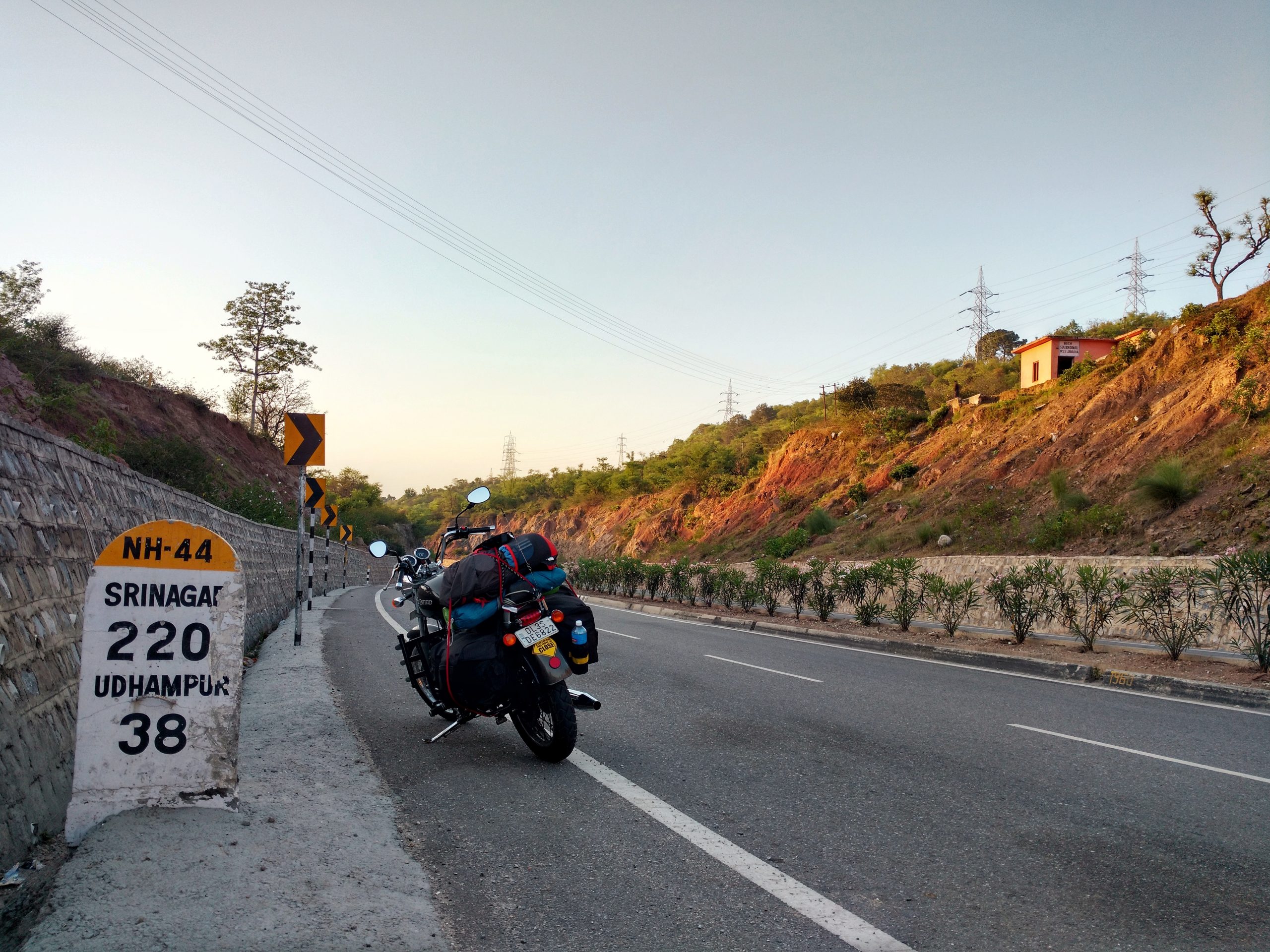 Honestly speaking I was a little scared when I entered the valley because of what I’ve heard and saw in news and all those notions were really holding a place in my mind, this was all still going through my head when I crossed the famous Lal chowk and reached a spot where the magnificent Dal Lake welcomed me, I was stunned to see the beauty and that’s when 3 J&K police officials approached me, I was nervous to talk to them and did not realise in the beginning that they were actually amazed to see me riding all the way from Delhi alone, we shared some good laughs and they finally let me go after having their share of fun, I also did like interacting with them because they were too chilled out and actually happy to see someone new.

My plan for day 2 was to reach Sonmarg but due to unpredictable weather and the road too bad it was not possible. I booked a room at Trident hotel and unloaded my bike to rest for the day because it was already evening time and I did not want to go any further post dark. 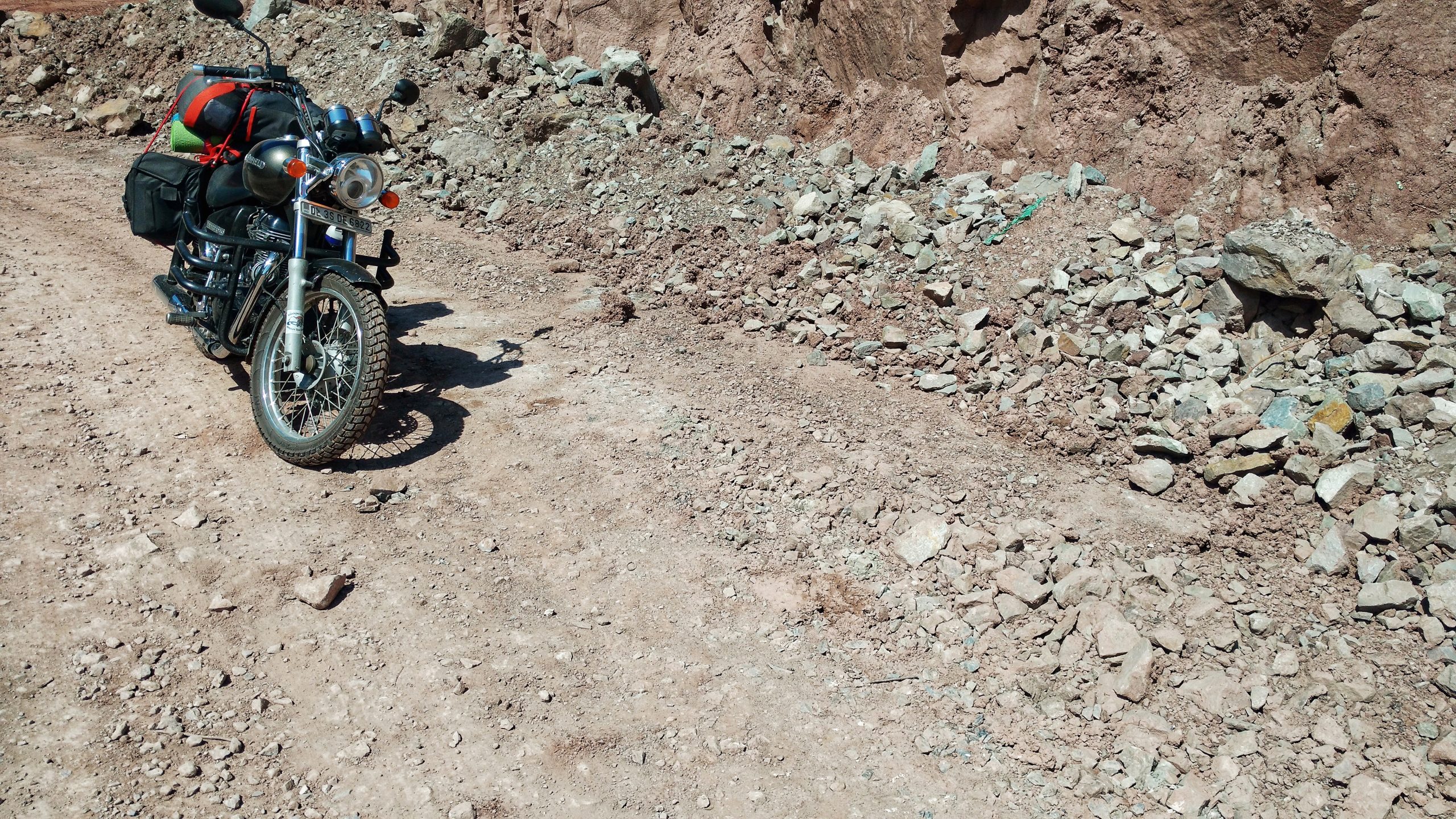 It was impossible as a traveller to sit back and not explore the beautiful city. I decided to roam around the lake, I also wanted to explore the Kashmir downtown but I was too exhausted to go any further so I decided to have my supper nearby Dal lake and headed back for the hotel.

It was only around 2115 hours and sleep finally hit me, I was so tired I did not even bother arranging my stuff and decided to do it in the morning.

It was the third day when I had to reach Kargil and thus started my journey at 0600 hrs from Srinagar, I was already feeling the morning cold but the weather was back to normal not so long after sunrise. On my way out of Srinagar, I met six riders from Punjab. I finally had some  company!! We all had breakfast at a dhaba and started our bikes together to reach Sonmarg. It was 1100hrs and we had to wait for 4 hours in Sonmarg to start the journey towards the mighty Zoji-La because of the combination of bad roads and traffic.

As we crossed the Zoji-La, the feeling of questioning my own skills came in. The roads were tough, but so was I. I had not travelled so far just to go back the same route. 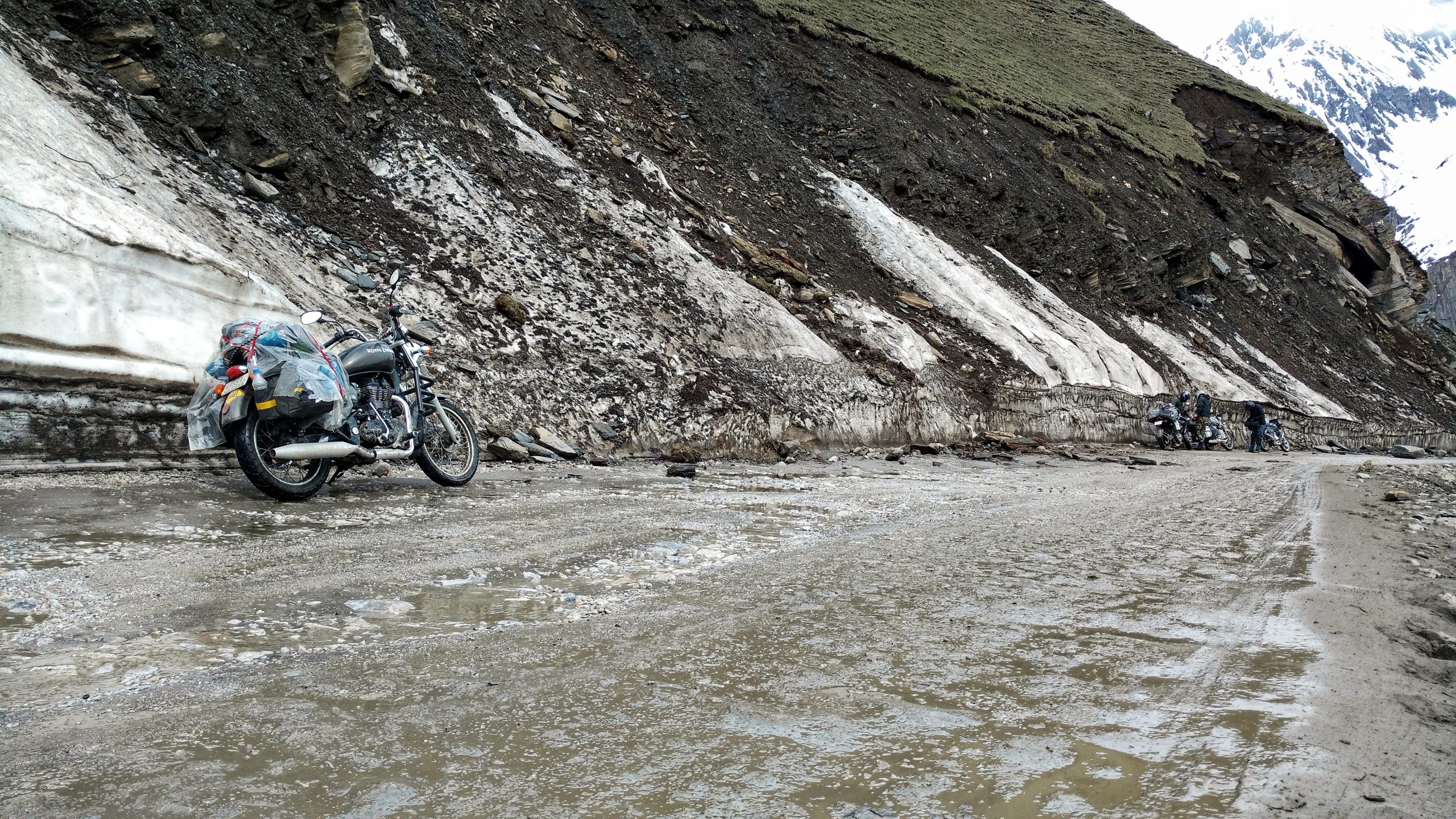 The pass was in really bad condition as the BRO had just cleared the snow off the roads and we were probably the first ones to take our bikes there. As soon as we reached the top, we treated ourselves with the popular Maggi noodles.

On our way to Drass, the roads were a real test of our skills and that of our bikes. There are no words to explain how rough and unfriendly the condition of the roads was. We reached Drass by evening and decided to make a halt for the night. The lodges were very inexpensive here. we were 7 people in 2 big rooms and guess what, we had only paid Rs. 100 per room, after settling down and getting rid of the dirty clothes and boots and relaxing a bit we ventured out for dinner we got to know each other a little bit more and also planned our next day. 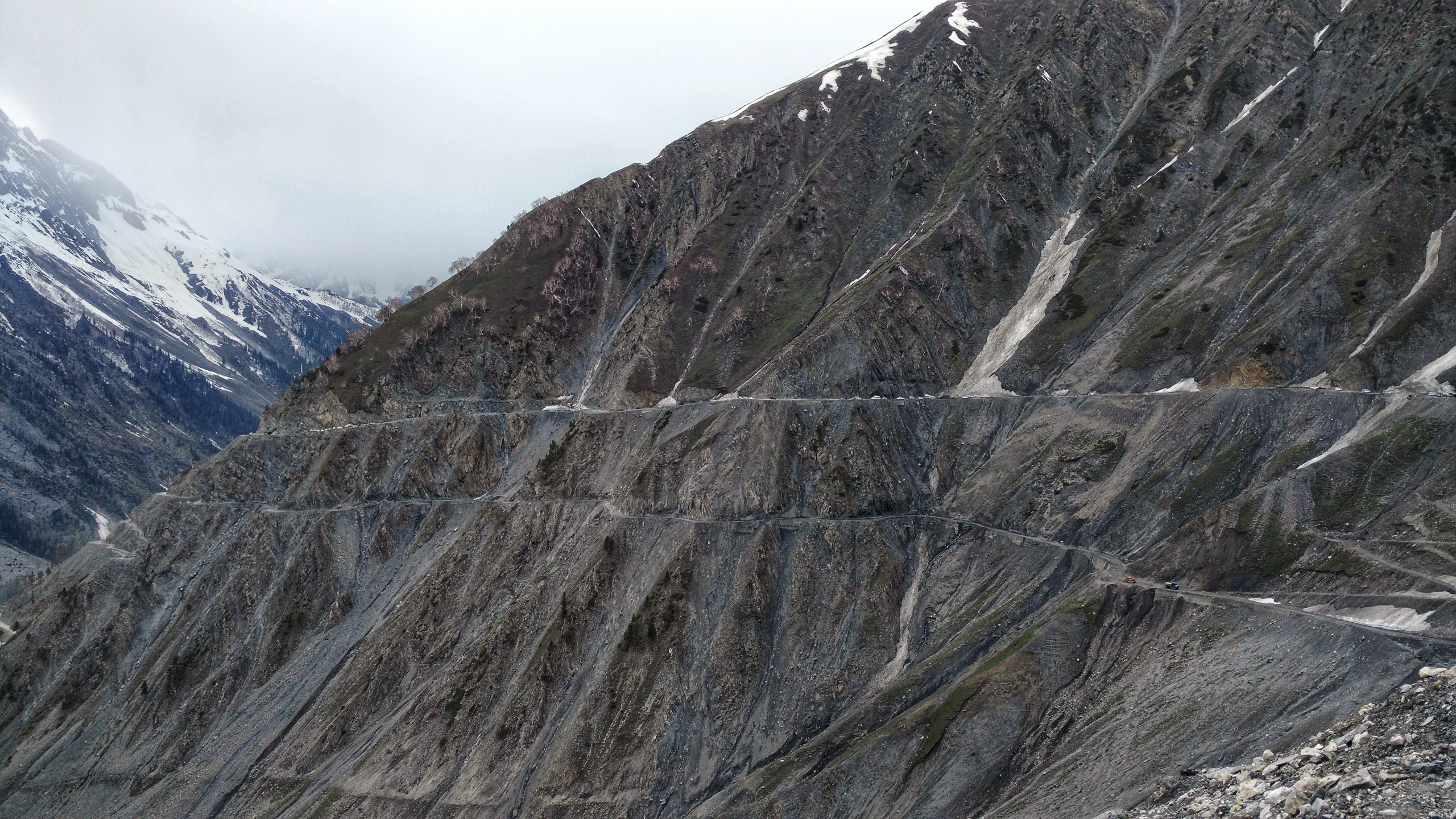 The day ended with exhausted bodies lying on the beds.

It was the Day 4 and we woke up in the world’s second coldest habitat -Drass. We woke up early morning to a lovely weather and had our breakfast so that we could hit the road early. We got the refill for petrol tank and tyre pressure checked before we continued through Kargil. The roads were well maintained and it was the national highway-1 on which we were riding. 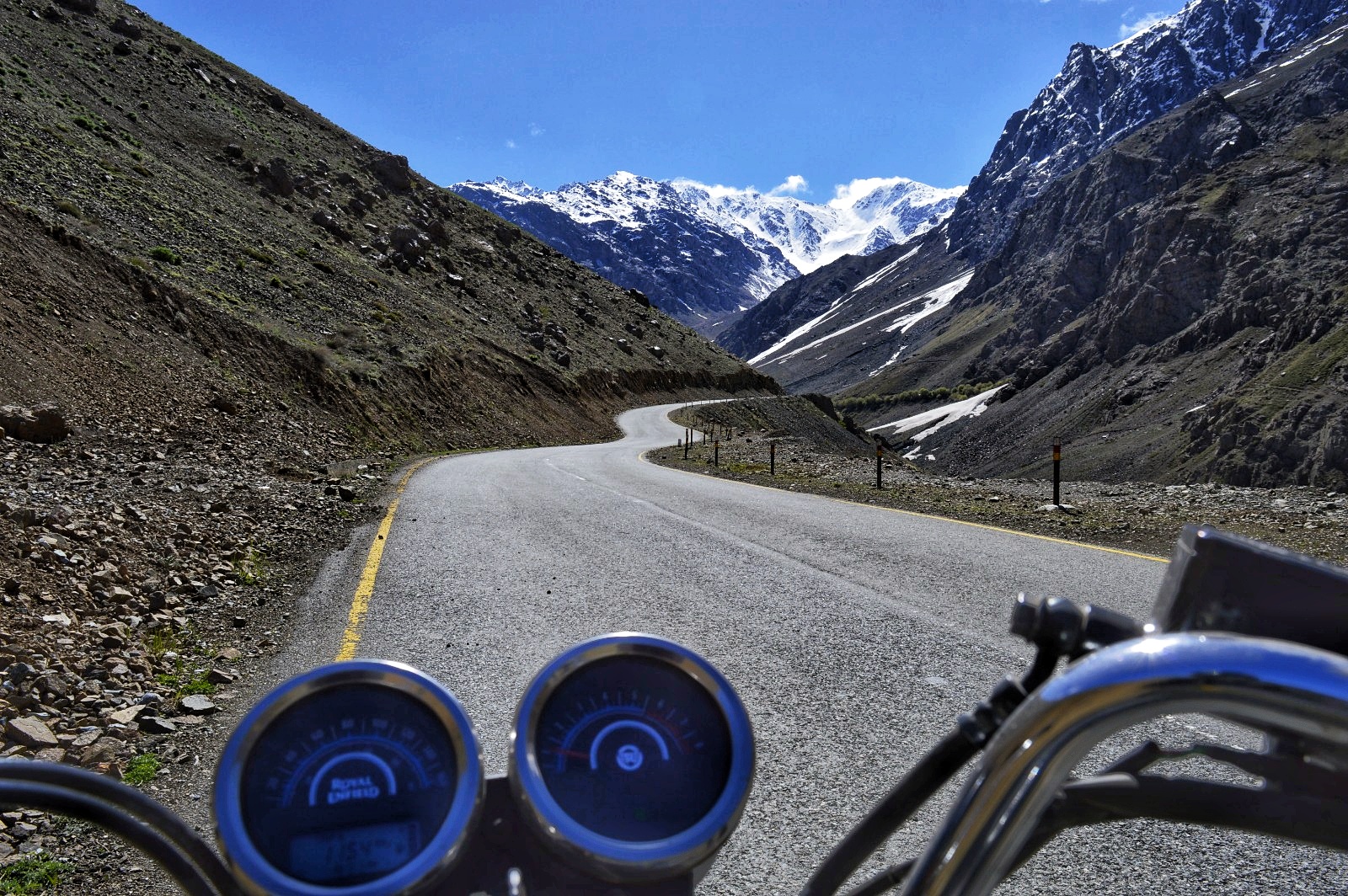 The view of snow clad mountains and picturesque landscapes kept us going. As we entered Mulbek, the weather changed and we had our lunch opposite the rock cut Buddha statue. At around 1620 hrs we reached Lamayuru, where we met a few Army Jawans who offered us tea, it was amazing to have spent some time with these real life heroes who always keep us safe and they are always so welcoming because they hardly get enough interaction with outside world while guarding the posts. 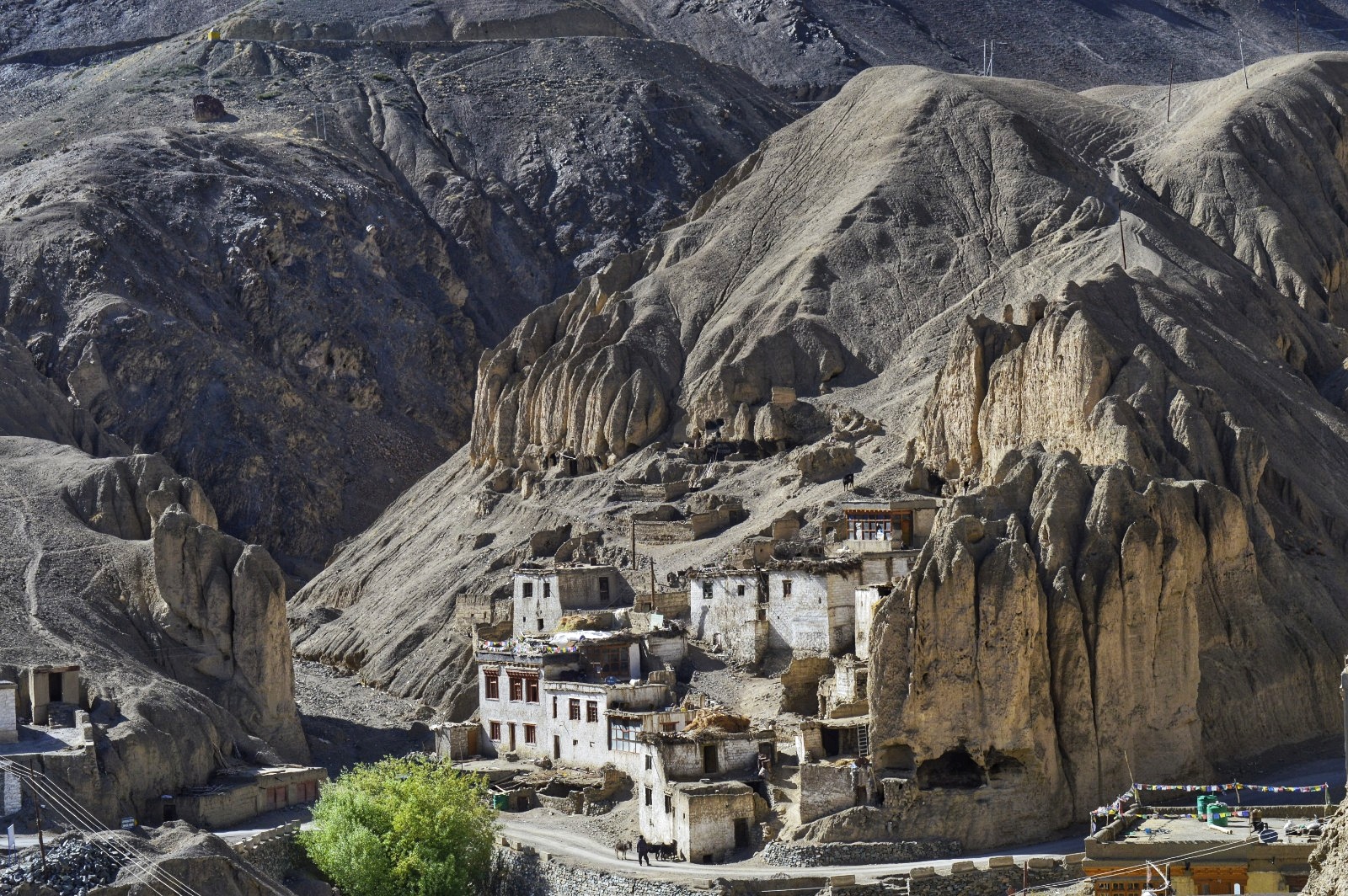 Lamayuru, the calmest place I came across so far and I fell in love with the place it was not only peaceful but the environment of the place was so relaxing that even after riding for the whole day my body felt fresh, this place had some divine peace that kept me attached to itself. I decided to stay overnight instead of continuing for Leh immediately. 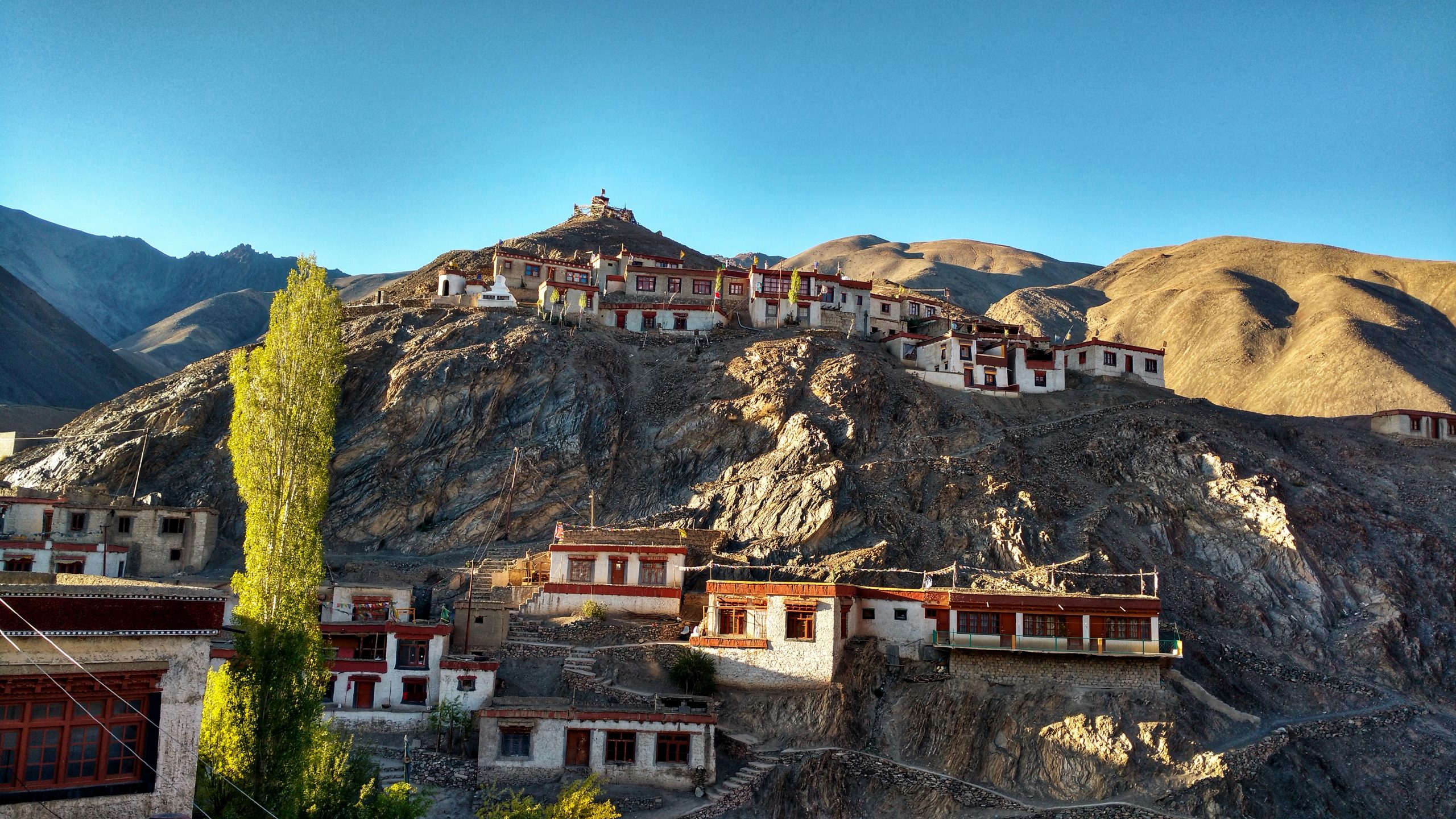 After bidding farewell to my travel friends, I booked a guest house and unloaded my luggage. I quickly took a shower and then went to explore the monastery which was built in the 11th Century. I met an Old Lama whose name was Dhawa, he was so impressed with my travel plans that he took interest to show me around the monastery. I spent almost 3 hours talking to him, after which I finally decided to head back to my guest house and call it a day. 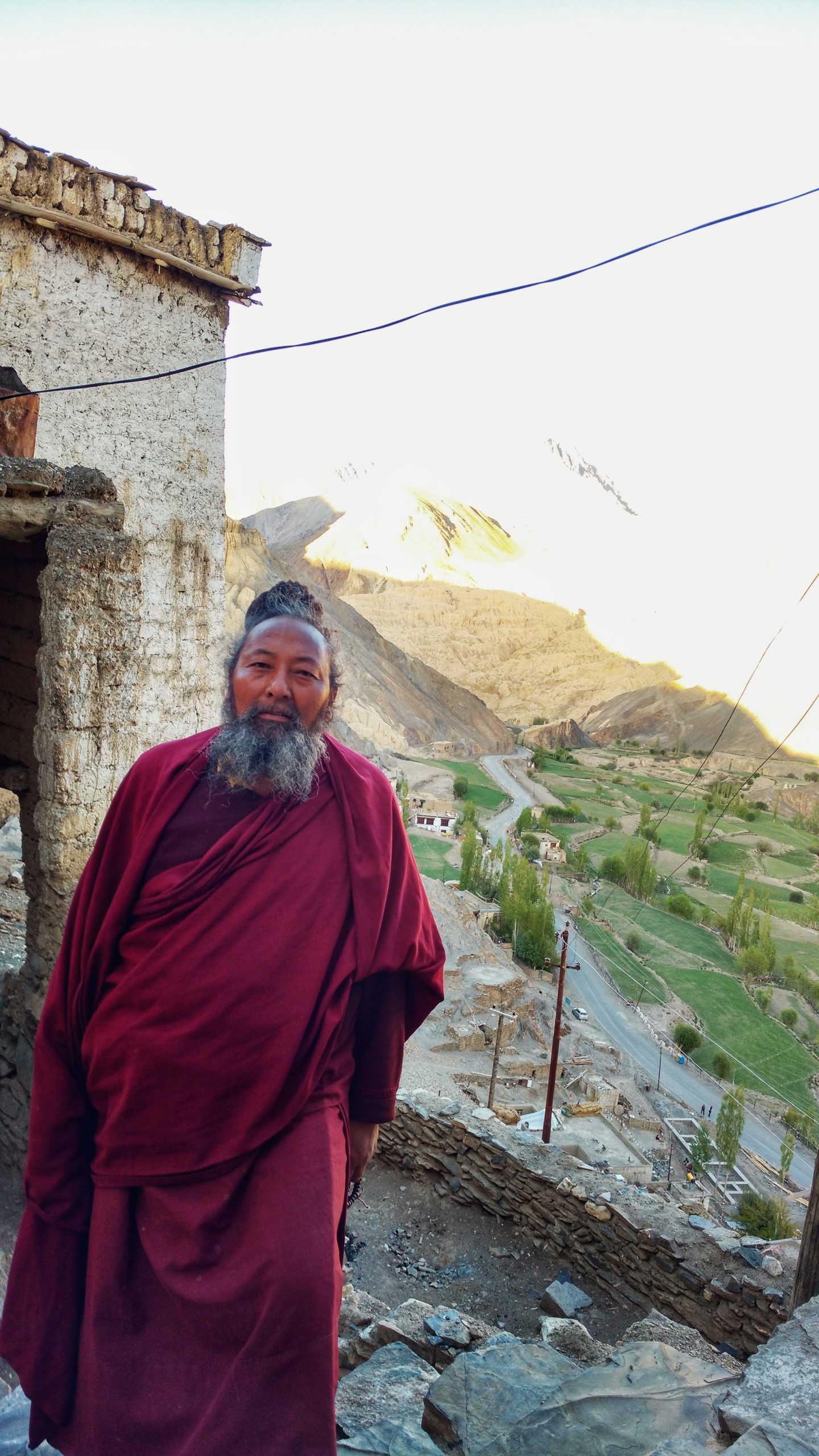 P.S. This was the day when the rear brakes failed once while riding down the slope and also because of the high altitude I got a nose bleed, all thanks to the scorching heat and the extra layers of lining that I wore when we started from Drass. This was the first time something like this ever happened- first with the brakes and then nose bleed. But everything got sorted eventually!

Finally it was the day I reached Leh. I started from Lamayuru around 0715 hrs and had Maggi for breakfast on my way. The landscape had changed, there were fewer crowds around. I enjoyed my ride in the empty and smooth road, few people, plain landscape surrounded by mountains, clean blue sky, less greenery and that silence. It was just perfect for the solitary ride. 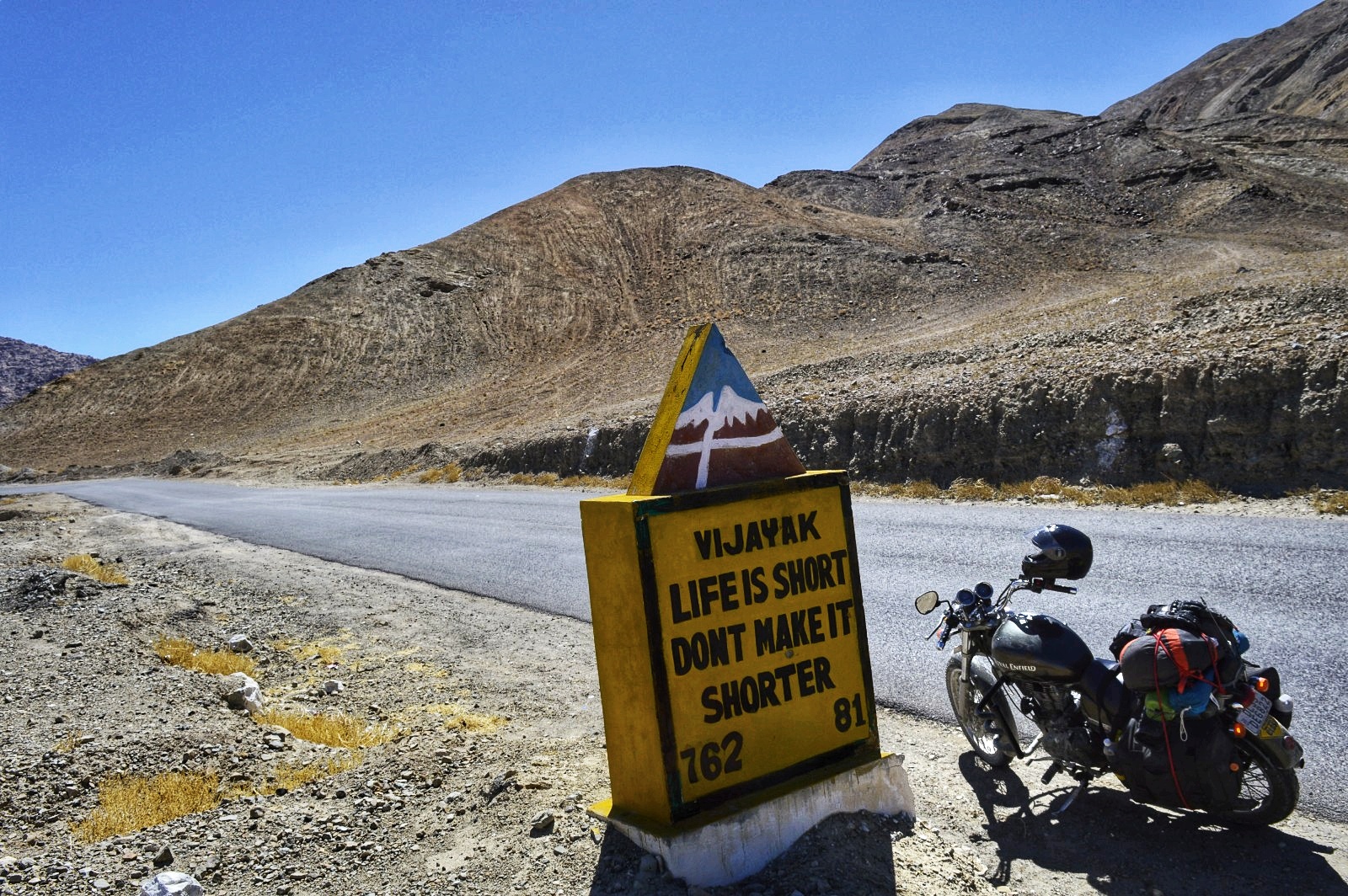 I met my biker friends from Punjab again at the magnetic hill and we decided to trek the hill together. On an impulse we decided to take our bikes along till a certain point and then trek on foot ahead the experience was great but taking the bike uphill wasn’t a very smart move and I would only recommend you do it if you are in a group so you can get help if needed. Our next halt was Pathar Sahib Gurudwara where we had launch at the langar. 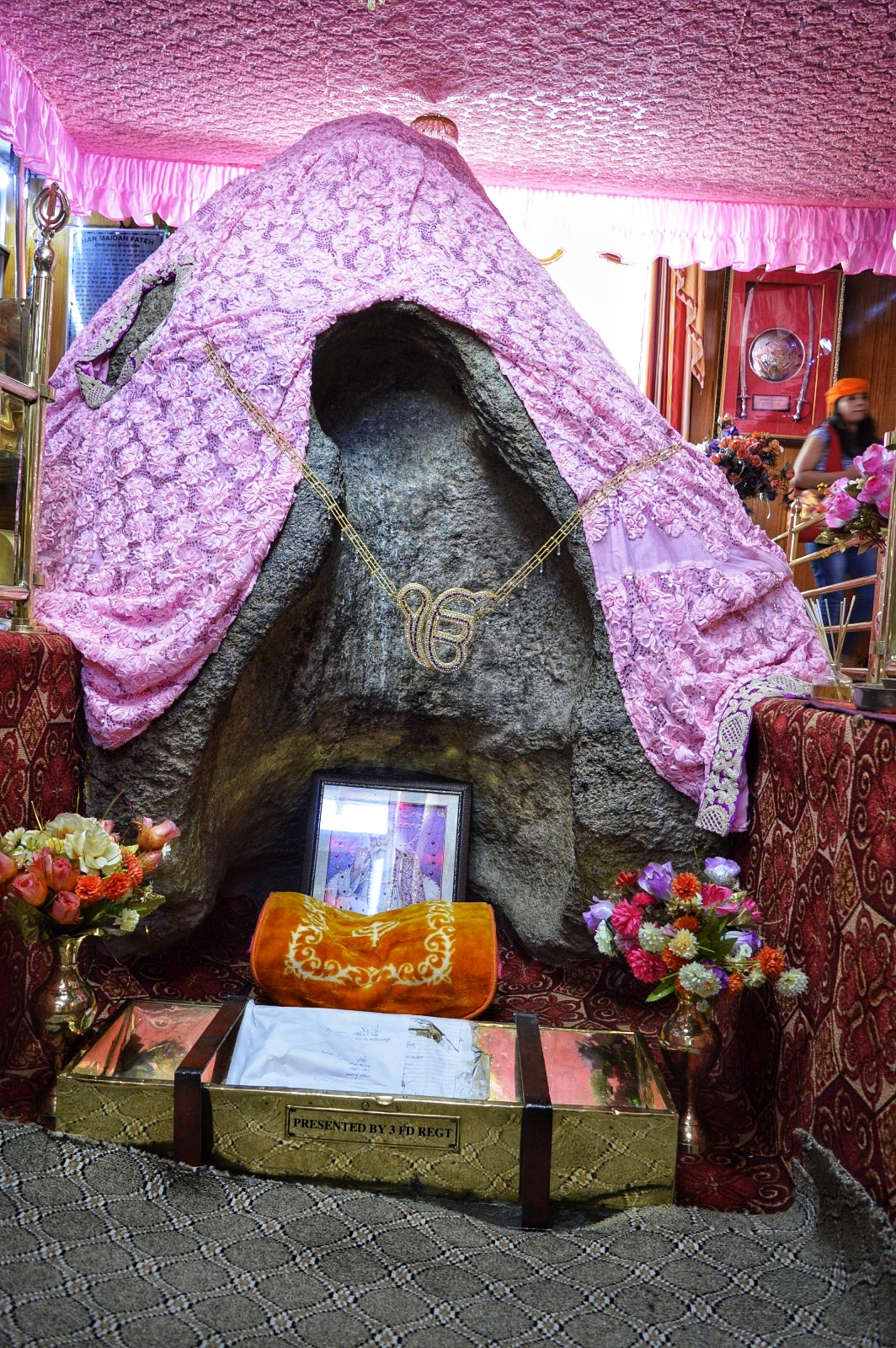 Leh was another 17 kms ride, apart from the beautiful view and mountains- it was nothing like I had ever imagined. The city was well developed with shops, fuel stations and guest houses. It had everything a city needs. We decided to stay together and crashed at a guest house at Fort Road in Leh. After quickly taking a shower and sorting our stuff we left to explore the city on foot, checked out the Tibetan market, shops and Leh city main Market. For dinner, we all went to a Tibetan Restaurant and enjoyed some local cuisine. That night I slept with a sense of excitement of being in Leh and I had so much planned for the coming days.

Stay tuned for the next part of the journey. 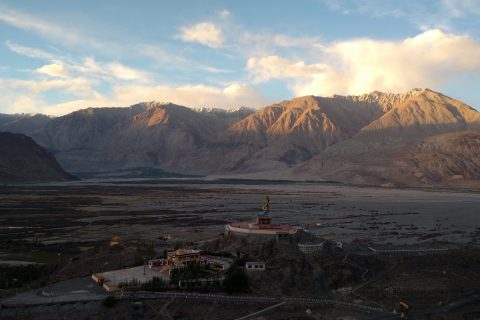 My Ladakh My Heaven || The hardest Goodbye

Day 11- As they say impromptu plans are the best – they are right. One day is never … 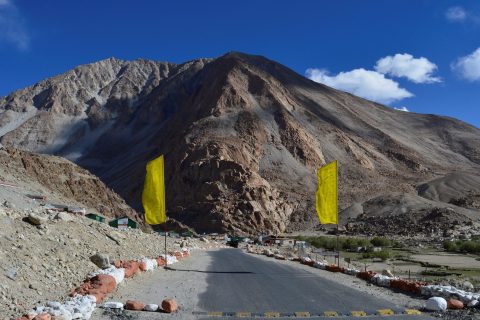 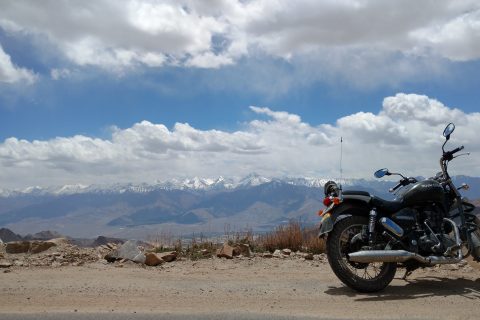 This story is about my dream ride to the heaven on earth- Ladakh, a dream of every traveller, …